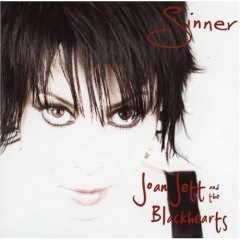 Punk-rock godmother Joan Jett is not one to keep her thoughts to herself--but when it came to writing about sociopolitical issues, the timing had to be right. The result is the charged album "Sinner," her first release in 10 years.

"I've wanted to write about these subjects--politics, spirituality--for years," Jett said. "But how do you do that? How do you approach the subjects without coming off as preachy or telling people what to do? It's a delicate thing to try to write.

"I really wanted it to be organic and coming from my heart. So, I think maybe the initial thought of wanting to go in that direction, I had to wait until things happened in our world and in our country that fired me up enough where the words came out organically. Something like [the song] 'Riddles,' when you look at what's gone on in this country in the last five years, I don't even recognize it. Sometimes I think the thoughts that we're having at the time: 'Has anybody seen this? Days go by and people don't seem to get upset? Am I crazy? Are people seeing what I'm seeing in this world?'"

To address the issues, she and co-songwriter/keyboardist/best friend Kenny Laguna wrote a skeleton version of "Riddles." Once they were in the studio, the words were flowing.

"I'm singing the lyrics that Kenny and I came up with. As I was singing, words were coming to myself and Kenny. We'd stop the tape, I'd run in the control room and write down these lyrics and I'd go back out and sing them. They started to take shape," she said.

"When I got to the solo and I say, 'Clear skies baby,' the whole thing kind of fell into place. This is what we would write about. All these issues. Anyone can take 'Riddles' and apply it to various issues that are going on in the country--whether you're talking about tax cuts, the environment, the Katrina response, the war in Iraq, lack of jobs. Every sentence has something to do with what's going on. It comes from a real place, and I'm very proud."

Jett talked to LiveDaily about "Sinner," meeting and greeting fans at stops along the Warped Tour, and working with 4 Non Blondes' singer/songwriter Linda Perry.

LiveDaily: Are you happy to be home from the Warped Tour?

Joan Jett: I had a blast doing the Warped Tour, but it's good to be home, for sure.

With the Warped Tour, did you sense an increase in your fanbase?

Well, I'm hoping that we did. I sure saw a lot of kids that I'm sure didn't know a lot about us, or we were definitely new to them. The kids who came up to me afterward, we'd talk about music, sign a lot of autographs. So I'm sure we made a lot of new fans.

That must have been fun to hear the kids' take on music. That's nice of you to meet and greet the fans afterward.

I think it's really important, because that connection with your audience and just seeing everybody up close, talk, say hello, how are you doing, did you have a good time, everyone has different questions for you. It's not anything that's consistently the same all the time. They talk about families. They talk about areas of the country. Somebody grew up someplace. There are millions of different subjects that you end up talking about. I love to engage with people who come to see us.

Why did you decide that now was the time to release an album?

We've been trying to get this CD out for awhile. This is the time when we were actually able to make it happen. We've been working on this for a couple of years. Finally we got it all together. We were able to make it work, and it came out just before the Warped Tour. That was definitely helpful.

What held up the album?

Business issues. We used to be through Warner Bros. Records. They're very artist oriented. They wanted to be involved with the album-making process, which is fine with me. But they kept changing administrations. So we'd have one administration there, the president would be involved, and then they'd change. The next administration wanted to get involved. So we kept getting stopped. This happened five or six times. It made it very difficult to get a record out. A couple of years passed. So I finally just went on the road for about a year and a half. When I came back to it, we amicably separated from Warner Bros. I just picked up where I left off, trying to write the rest of this record. It took awhile to get out.

The guitar riff. My guitar player and I both wanted to play that. It's something as simple as that. We liked the song. But we wanted to play it live and wanted to re-record it.

What was it like to work with Linda Perry and Kathleen Hanna?

You're talking about two very different artists. I met Kathleen ... actually, probably out in Seattle, when I was doing a lot of work out there. I did some production for her band at the time named Bikini Kill. They were punk rock, three girls and a guy. I produced [them]. It was only natural that I sort of tried to write songs with her. Kathleen is very sort of outside the box, and forced me to write in a different way. I just thought it was a lot of fun to give that a try. There's probably, I think, three or four songs I wrote with her on "Sinner." Then, Linda Perry I've known for years, [dating back to] when she was in 4 Non Blondes. She's always been a great songwriter. Then I guess she became just that. She stopped performing live and just focused on writing songs, and we just had an opportunity a couple years ago to sit down and try to write songs. We had a shell of a song--we had the melody and the music and some lyrics that weren't really resonating with me at all. Over the last couple years, Kenny Laguna and myself have been reworking the lyrics and came up with this song "Riddles" that came out of the sky, you know?

Blackheart Records is celebrating its 25th anniversary. I know you've been through a lot, seen a lot, done a lot. What sticks out in your mind as landmark events?

Oh God. [Laughs] I've done too much to pick out a couple that stick out. Blackheart Records being 25 years old represents staying power and the fact that we weren't able to get a record out through conventional means, so we had to create this record company to put out our records if we wanted to be a band that had records to give out to their fans. So it was out of necessity that Blackheart was born. I think it's great that now, 25 years later, we're not only putting out our own music, but are able to put out music by other bands. That's really exciting for us. We look forward to doing more of that.

Ms. Jett has aged with grace. At 47, she seems eerily youthful and unjaded.
Posted by OmniMediaGroup at 10:51 AM

I met Joan Jett several years ago, Sandy West was living with me in my condo in Culver City,anyhow she called JJ and told her she'd like to go to see her in San Diego, she also said I'd be with her, so she left her name at the gate to get through to where both Joan and Cheap Tricks trailers were, anyhow San went upto the trailer she knocked and was all jazzed I'll never forget it, she said wait till you meet her, and she was really happy for Joan that she had a hit with I Love Rock & Roll, anyhow San was in for a huge surprise and an even bigger let down, you see Joan had changed anyhow she was told by whoever answered that Joan wasn't seeing anyone she needed her rest, now you do realize this was her former bandmember super close friend or so she thought she was literally in tears, thankfully Bunny spotted her and recognized her right off he said come on you two, he took us to Cheap Trick's trailer where we learned Robyn had got the same treatment and he too had been hurt, so when Ms.Jett hit the stage that night, needless to say oh I should mention Cheap Tricks management was handling the sound, and their mgr was oh some upset to see Robyn so hurt anyhow she ran out grabbed the mic and just screamed into it, but nobody heard a word, oddly something had gone wrong with the soundsystem.
Anyhow after the show we went and talked with her, San told her she was happy for her, I was really impressed by Sandy, she never even let on she was so hurt, instead she took the high road, congratualating her friend on how great her single was doing, and we went to Santa Monica and also to Santa Barbara, by the end to be honest I'd had my fill of Joan Jett, and I haven't seen this movie called the Runaways, howeveer it sure is odd, San asked and wanted for so very many years for their to be somekind of a reunion it never happened yet after she passes oh and Joan never went and saw her in the hospice, not once, nor did she attend the funeral, she instead spoke to Sandy from the stage in WA that night. I know that Sandy was too good a person to ever say anything negative, but now both Joan and Cherrie seem to care oh so much where were they when she was forced to spend time in jail with I might add Lung cancer, she only needed to pay the fines to be able to walk into a clinic for treatment instead, but now oh they mention her often, it makes me ill, I pray Sandy West the greatest female of Rock and Roll is R.I.P.

That's the saddest personal account of Sandy West and Joan Jett I've ever come across.

I admire JJ so very much, love her music...but very sad for Sandy West. People do change - who knows what was going on for Joan when Sandy went to visit her.

I have a feeling Sandy won't mind too much anymore. RIP, Sandy.